Extremely passionate about fishing and life in general. Loves his sister and can be overprotective of her.

Yuugo Takahashi
Carlos (カルロス, Carlos) is a character in Rune Factory 3: A Fantasy Harvest Moon. He is Carmen's older brother, and the co-owner of the lake resort.

Carlos is a fisherman by trade, and a very good one at that, although he has a touch of overconfidence in his skills. His fiery attitude can prove quite intense at times, and he gets extremely competitive regardless of the contest. Carlos believes there is a "King Fish" in the lake, and his ultimate goal is to catch this fish, which he claims tears up his nets and lets fish free.

He is also extremely protective of his younger sister Carmen, at times appearing almost as a father figure rather than a brother. If Carmen and Micah develop a close relationship, Carlos will object, saying he's not ready for Carmen to date anyone. He will challenge Micah to prove his worthiness by catching two Lover Snappers.

Carlos is rather flirtatious, judging by his behavior at festivals like Beach Day.

Carlos has spiky green hair, tanned skin, and blue eyes. He is muscular.

Eventually, he will invite Micah to dinner at the resort, where he proceeds to get drunk and embarrass Carmen by telling Micah that she used to wet the bed. He will pass out eventually, but not before finally admitting that he can accept Micah dating his sister.

Micah sometimes mistakes Carlos' comments for romantic interest in some of Sharance's maidens, such as admiring Raven's reflection in a blade Gaius forged, and Shara's superior salesmanship, but Carlos denies any kind of attraction, saying that he could never be tied down to one woman.

Carlos has claimed to be able to wield 18 poles at once. Whether or not this is true goes unverified, but he does wield a spear.

His younger sister, Carmen, finds his narcissism embarrassing, as he spends far too much time in front of a mirror, and while she apparently complains that their store is too often in the red, Carlos is perfectly content with the way things are. Sometimes, he has to go the apothecary because he gets scratched during their fights. At the end of the day, however, she greatly admires his fishing skills, openly praising him for them in public, and the siblings are known around town for their strong bond. Both of them share a mad enthusiasm for fishing and display a tendency to get easily excited, although Carmen demonstrates a greater self-awareness of it than he does. As cocky and overbearing as he can be, Carlos ultimately harbours a somewhat softer side for Carmen, worrying about her and wondering what she will do if she leaves to follow her own path in the future.

Carlos can often be found inside his shop. 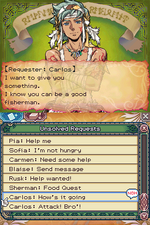 A request from Carlos.