The dungeon's season is Summer, and it's the second-easiest dungeon in both generations. Many enemies here are attuned to the Fire element. As such, Water magic and Water weapons work well here, and it's a good place to farm materials for equipment that has the Fire element.

In the second generation, Aaron and Aria must solve all the mysterious statues and defeat the dungeon's boss to progress. Each statue gives one Tablet Fragment, and the boss also drops one.

After defeating Fiersome, Aaron and Aria must defeat the Shrine's guardian to gather the Ancient Stone Tablet fragments. Each level has two pedestals, one of which does nothing, and one confers healing. The Chimera awaits at the bottom, and drops the second Tablet Fragment when defeated.

In the first generation, only areas A-E are available. On the map below, an S marks the location of a statue, while green marks a farming field. Blue indicates fishable water. 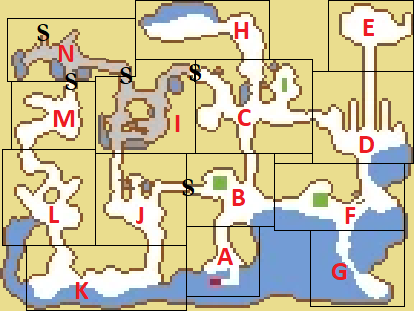 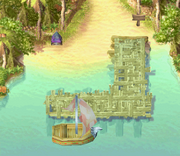 There is a save point here. The difficulty sign is also here, and Yue has her shop next to the sign on Tuesdays, unless it's raining.

As well as a 2 x 2 farming field, there are two mining rocks in the southwest corner, partly-hidden by trees. To use Inquisitive Waltz, stand at the west edge of the northwest pool while accompanied by a flying monster.

The statue here requires six Pineapples to pass. They must be placed after 6PM.

There are mining stones and a 1 x 2 farming field here. The mining stones are in the southwest corner, on the pavilion. This is also the trigger location for Inquisitive Waltz. The farming area is in the northeast, and has two Rune Flowers near it which can be cut for RP.

The statue in the Northwest corner gives Aaron and Aria a quiz.

An Orange tree grows at the western entrance, producing three Oranges every three days. There is also a save spot here below the entrance to the Boss's lair. There are also two Rune Flowers to the right of the stairs.

The Northwest search location is under the Orange tree. The Northeast one is where the Rune Flowers grow.

In the second generation, this is the boss arena. Inquisitive Waltz can pillage the hold from the Northwest corner.

There is a 2x2 field at the western entrance, with two mining rocks above it. Inquisitive Waltz triggers on the east edge of the area, on the grassy patch.

There are two Rune Flowers at the end of this sandbar, and Inquisitive Waltz triggers where the Gate is.

There are two Rune Flowers at the entrance to this area. Inquisitive Waltz only triggers on the Western edge of the beach.

Like most caves, this is a good mining location. It has Rune Crystals that restore RP in the Northeast and Southeast corners. It is one of few areas with no Inquisitive Waltz triggers at all.

There are two Rune Flowers, nearly hidden behind the foreground trees in the southwest corner. There's also an Orange tree across the stepping stones in the north edge of the area. Inquisitive Waltz can trigger either in the Western area near the Rune Flowers, or in the Northeast on the sandy patch of path.

There are some Rune Crystals to smash for RP near the central Gate. Inquisitive Waltz triggers on the far West edge of the screen, by the low palms.

There are two Rune Flowers in the Southeast corner, almost hidden by the foreground. Inquisitive Waltz triggers on the cliff in the Northwest corner. The statue at the northern exit requires 6 Moondrops and 5 Pink Cats to pass. It's one of few areas on the island where you can't fish.

The well-guarded entrance to the Tropical Shrine. You need a flying monster to search above the shrine entrance with Inquisitive Waltz. 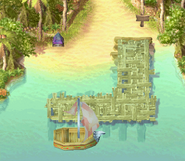