General Store's owner. So shy that he rarely speaks, but when he's at the store, his personality changes.

Bismark is the twin brother of Sierra, who are complete the opposite of her. He is very shy, and finds it hard to talk to people unless it's about the general store that he owns with his sister. Bismark is self-conscious about this, and through his heart events will show that he's not happy with the person that he is. Bismark wishes that he were more masculine, and wants to socialize better with people so that he can run a more successful business.

Bismark is very determined to run his store, but constantly has to chase after his less business-oriented sister who frequently runs off to have fun instead of watching the store. He often becomes frustrated with Sierra when she doesn't act responsibly and abandons her duties. He's a very responsible person, and worries quite a bit in general.

Bismark has light skin with shoulder-length gray hair (brown in game) and brown eyes that are covered with round glasses. He wears a white shirt with striped red tie, tucked beneath blue vest. Paired with this are orange pants and light brown loafers.

During the Masquerade Festival, he wears bunny ears and asks for the player's opinion on them. The player can either reply "It's great!" or "It's...weird." Regardless, Bismark himself will convey that he was reluctant to wear them, but since his sister was the one who made his mask, he wore the ears to honour her effort.

It is revealed in his 5th Event cut-scene that Bismark is not so shy when someone needs him. While eating with Aden at the inn, some rowdy men try to force Odette to come with them. Bismark gets angry and shouts at them to leave her alone. This makes a turning point in his attitude of not being able to talk to girls other than in business ventures, as he can look Odette in the eye from then on.

After beating the game and choosing to play as Sonja, in Bismark's 6 FP cutscene, Sonja will get accidentally pushed by a stranger while she and Bismark are chatting. Bismark manages to grab her in time from falling, and Sonja will remark that his grip hurts. It can be noted that he is actually strong beneath his shy exterior.

Well, if it isn't Aden and Sonja! Do you have a moment to chat?

There are no requests for Bismark.

Bismark is the twin bother of Sierra.

Runs the store when his sister is out playing. Often seen walking on the beach or in his room. When working, he can be found stocking shelves to help keep up the inventory. 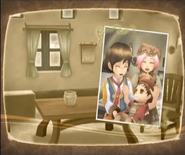