Selfish Aristocrat-The daughter of an affluent family. Indifferent to her surroundings, her maid. Tabatha, is her only friend in the world.

Jasper (father; not in game)

"Once I get bored of Trampoli, I may move to another summer home. You'll have to entertain me so that doesn't happen."
―Bianca[src]

She acts snobbish as well as spoiled, and almost always speaks in a tone that portrays this.

As a returning character from Rune Factory: A Fantasy Harvest Moon, Bianca still looks the same like when she was in the first game.

Since Bianca can already get whatever she wants, she doesn't like gifts, and the only way to raise her LP is to talk to her daily. In order to keep Bianca in town, you must find a purple elephant located in Whale Island. Bring it home with you and put it in your Monster Hut before the end of summer. Bianca will then name the monster Francoise and move into her summer house permanently.

"You've got some nerve."
―Bianca[src]

Unlike other characters, there is no gift that Bianca likes. The only way to raise her affection is talking to her. Items won't do anything to her LP unless it's for a festival. Some people say Bianca is stuck up and snobby, but many seem to overlook the fact that all she asks for is friendship and conversation. Talk to her once or twice each day and her hearts will increase.

To get Bianca to stay in the village when summer is over, you must give her a pet elephant. You can do this by visiting the deeper part of Whale Island. Keep walking further into the interior of Whale Island towards the Fin area, and you'll run into a pink and purple monster that looks like an elephant - he means no harm, and will only circle around you. If you have the barn built (in fact, you must have it built to witness this event) he will appear in your barn next time you go there. Then, the next time you visit Bianca's mansion, the elephant will have followed you there. A cutscene will ensue where Bianca will request to keep the elephant as a pet. When you say yes, she'll be happy and name him Francois. Since Francoise can't survive in any other conditions, Bianca decides to stay in Trampoli permanently to take care of him.

When you have reached 8 LP with Bianca, visit her mansion. The player will find Bianca shriek and fall to the ground - Francoise has run wild and hurt her. The player will ask if she's okay and Tabatha will run to her aid. When Bianca denies that Francoise hurt her, Tabatha makes her tell the truth. Next, Tabatha looks to the player and tells that he needs to send Francoise back to the First Forest. Bianca is upset (and so is Tabatha) and she begins to cry, but she decides to let him go. The player sensd Francoise back to the First Forest. Bianca decides to stay regardless of the fact that her long-time pet is gone.

After viewing Bianca's elephant constellation, visit her the next day. Bianca will drop a piece of paper. When the player points that out, she will give it to him and he read that there's a clue on it. Bianca will tell the player to follow the clue.

Go to the observatory and examine the bushes. The player will find another slip of paper with a clue.

Next, go to Lake Poli and ride the kayak to the island in the very center of the lake, with the big tree.

Walk around the small island and examine the grass to find the next item - a diamond. Take the diamond back to Bianca. Upon reaching her front path, the player will find a wedding ring on the ground.

Bianca will come out and comment on the ring - she takes the ring for herself but tells you to keep the diamond.

Bianca will sometimes say that she wants to try a food called "bavarois" and requests the player to bring it to her. There is no recipe for it and cannot be found, so this request will never be completed.

Bianca will also often mention gourmet dishes that Tabatha prepared for her, sometimes asking if that makes Raguna jealous. This behavior is a result of having been raised in an extremely wealthy family with no siblings or close friends besides her maid. As Raguna gets closer to her, she will learn to act with more consideration towards others. 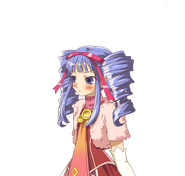 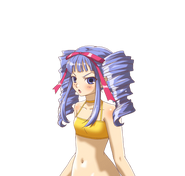