An Elegant Aristocrat of Norad

"Well, thank you for the courteous introduction."
―Beatrice

Beatrice is a noblewoman on a secret mission. Although sheltered and out of touch with the outside world, she has a strong sense of responsibility. Her many talents include playing instruments and riding monsters. However, due to her pampered lifestyle, she does not have a proper grasp over the concept of "normal" things, and Reinhard wonders if this culture shock will affect her very much. Although Beatrice originally planned to leave as soon as she finished her business in Rigbarth, her heart changes once she gets to know the protagonist and the townsfolk.

Beatrice has light skin and long gray hair with wavy ending pulled back into braids. Her shoulder-length straight forelocks have half of it tied with two gold diamond accessories. She has turquoise eyes and visible pale red blush.

Beatrice and Reinhard will first appear after the player has cleared the Belpha Ruins, and the duo are first seen using the soulstone at Livia's quarters. Livia and Reinhard reveal that Beatrice is actually a princess, but has chosen to hide her identity for undisclosed reasons and ask for the player to help keep their secret. Later, the two subsequently move to the top floor of the ruins.

Beatrice, Lucy, and Priscilla are having a meal in Elsje's restaurant, and they offer for the player to join in. Later, Beatrice takes a spoon of stew, but it turns out to be too hot. Lucy tells that the "normal" way would be waiting for the stew to become cool before actually consuming. When Priscilla and Lucy begin sensing something odd with Beatrice's behavior, the player explains that Beatrice's parents were always out at work, so their food always ended up lukewarm.

The next day, Beatrice visits Studio Palmo, but causes a ruckus when she constantly misinterprets the utility of certain crafts such as a water pitcher for a vase. Initially, Ryker complains over Beatrice's naivety and asks the player to stop her, but Palmo is surprisingly inspired by Beatrice's ideas and takes her to his workshop instead. Nonetheless, Ryker still finds her abnormal if she her ideas are on par with Palmo's.

The player visits the bakery to find Beatrice admiring Randolph and Yuki preparing bread. When Beatrice wishes to help, she accidentally messes up the dough that is resting, and Randolph allows her to come over the next day to help knead. The next day, the player visits her, and she decides to leave town to obtain some wild strawberries at the Whispering Woods, while the former informs Simone to let the town test Beatrice's bread.

Shortly after Beatrice's departure, Priscilla and Lucy report that she has not yet returned after a long time, causing the player to follow Beatrice's path, where she is attacked by a Ghost. After the player rescues her, she asks them to keep the incident secret from Reinhard to keep him from worrying further.

The following day, Beatrice, Randolph, and Yuki host the party, with the bakery owners crediting Beatrice for the new buns. The townsfolk consider it a special treat and wish for it to be made a local specialty. Behind the scenes, Reinhard is informed of what happened and apologizes to both the player and Beatrice for allowing her to get into danger, but Beatrice instead asks him to enjoy the event and that the player has proven reliable to look after her without him.

Beatrice and Reinhard are talking over the state of their mission before the player accidentally walks in on the two. At her own insistence, Beatrice has the player listen to their discussion as both reveal a locked door in the Belpha Ruins. Beatrice then reveals that she was using an old poem of her father's in Norad's coronation ceremony to find some clues within the ruins. Reinhard states that Beatrice's family used to be interred in the ruins, and that Beatrice "must guide the stars" in the town. This test of her worthiness to the throne, however, has yet to properly appear.

The next night, Beatrice and the player begin conversing as the first sign of her trial involved the stars. The player then suggests the "place closest to the stars"; the town square, and Beatrice suggests trying the Great Tree Plaza. Once the pair visit it, a voice emerges and recognizes Beatrice; affirming she had the ability to rule. Though the act drains her strength, she is nonetheless successful and steps to the next verse of the poem; "a monarch forged by the elemental light". During her first trial four orbs appeared and scattered, each representing one of the Native Dragons.

The next day, the player learns that a foreign object dropped onto the northern lake from Fuuka and Elsje. As soon as Beatrice and Reinhard are informed, they pay a visit, and Beatrice is given a trial by Aquaticus. With the player's help, she clears the trial but collapses afterwards. Once the player returns home, Reinhard reveals to her that a suspicious individual was spotted outside town, and the two agree to increase their pace.

The next morning, Darroch and Martin report an issue with their furnace, and the player discovers another one of the elemental lights lodged within. After having Darroch and Martin clear the store, Beatrice undergoes her second trial, but becomes more fatigued as it wears on. Despite this, she is able to clear Fiersome's trial.

Afterwards, Lucas finds himself in the clinic after becoming sick upon catching a light emerge to the east of town. The player, Beatrice and Reinhard then meet Lucas outside his house, and begin Ventuswill's trial. Due to the strain, Lucas promptly sends Beatrice back to her bed after she clears the trial. After Reinhard departs, Lucas reveals to the player that he was aware of the trial that Beatrice was taking, though he is curious why as she is already royalty to begin with.

Upon returning to Beatrice's quarters, the player finds that she has yet to wake up and asks Reinhard for the truth. Reinhard reveals that the war between Norad and the Sechs Empire left the economy drained even with their victory. The influx of bandits from the Empire's remains did not help as Beatrice's corrupt uncle took the reins of the throne after Beatrice's father became more sickly. Beatrice's elder sister, and the rightful successor, was too ill, while her younger brother, the third-in-line was too young to become a proper successor. Beatrice, the second-in-line, herself proved to be wise and able amongst her siblings, but her uncle's corruption allowed him to stand over her. In an attempt to boost his reputation, he intended to force his niece to marry one of his benefactors, which caused Reinhard and Beatrice to flee instead. Their true purpose was to retrieve the Royal Emblem of her family to prove that she was the sole and unanimous claimant to the throne.

Beatrice, however, is revealed to have woken up mid-conversation and eavesdropped on their talk. Reinhard would subsequently leave her with the player as they discuss what happens once Beatrice's mission is complete. Although the two value their relationship, the player prioritizes her mission, and visits the well the next day, where Terry and Cecil report an object that fell inside. Beatrice, Reinhard and the player decide to drop to the bottom of the well to begin her final trial, but voices of peasants, the ones who bore the brunt and suffering of the wars of Norad, lament and curse the royalty, but Beatrice chooses to remain strong in spite of this, and is recognized by Terrable as a result. Because of her condition, the player and Reinhard are forced to take her to Simone's clinic instead.

At the following day, an assassin comes to kidnap Beatrice, but she is saved by the player in time as Reinhard and Simone also arrive. Beatrice would finally reveal the true purpose of her visit to Simone. Since Beatrice had now completed her trials, Reinhard chooses to immediately return to the capital to report the Duke's actions and Beatrice's own accomplishments while she and the player remain in town under protection. The pair are able to then unlock the locked corridor, but the player is then attacked from behind by the assassin. Unexpectedly, an Arachne appears behind the assassin. The player is able to defeat the monster, but the assassin manages to grab the emblem before Beatrice. In spite of this, Beatrice manages to persuade the assassin to seek a better life and has them turn to her side instead. Once the assassin willingly chooses to return the emblem to Beatrice, she and Beatrice return to the capital to rejoin Reinhard.

The next day, to the player's surprise, Beatrice and Reinhard returned to the capital, and her uncle was found guilty of treason thanks to testimony from the assassin. Though her place in the throne was now secure, she chooses to relinquish her claim in favor of her father, as it was revealed that her uncle bribed the king's attendants to poison their monarch. With her father's blessing, she was allowed to return to Rigbarth, and she admits that while she loves all her subjects, she believes the player to be the one most in need of her in the end.

Beatrice can accompany the protagonist in battle. Her starting weapon is a hammer. 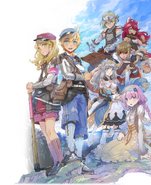 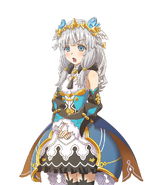 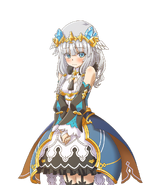