A lazy, lazy blacksmith. Always tries to get rich quick, but always fails hard. He claims to enjoy the attempt, however. Despite all this his skills are second to none.

"A lazy blacksmith who shrugs nonchalantly when told he's in the red and continues dreaming up schemes on how to make more money. He's talented with forging, but not much of a salesmen, as his get-rich-schemes are so over-the-top that they always go up in smoke. Still, he could never really outright lie to anyone, so the townspeople don't mind his antics."
―Website Description

Bado (バド, Bado) is a character in Rune Factory 4.

He is a dwarf and a blacksmith who has little enthusiasm for work. What Bado really wants in life is money, and his lack of ambition in his work spills into this goal, as he doesn't have any particular idea what he'd do if he got rich. Rather than take the time to make quality weapons, Bado would rather think of get rich quick schemes. Despite this attitude, he doesn't particularly like scamming people, so many of his efforts fall flat. He will constantly promote things that sound useful (or not) but are quickly revealed to be rubbish when the protagonist takes a closer look at their title.

Bado is a well-built man with slightly tanned skin and small blue eyes, matching his short hair and beard. His ears are pointed, like Doug and Margaret.

Because he wants to appear a very busy man, Bado likes useless items like Scrap Metal, which he can litter around his work area. Unsurprisingly, his lack of work ethic and many failed schemes often leave his business in the red. Many of the townsfolk, particularly Forte, are constantly on his case to do his job. His constant failure is even a joke among some. Nonetheless, he persists in his lazy and irresponsible ways. He will even advertise some of his latest crazy scams in the middle of festivals.

Despite this, Bado does have talent. While most of the swords he makes are so dull they make for better bludgeons than blades, the sword he made for Kiel and Forte's father was so finely crafted that no matter what strain was put on it, it never broke. Bado is also incredibly strong, and can lift large crates of weapons with a single arm, much to the surprise of the protagonist.

Vishnal and Kiel are the only people in town who might not see through him. 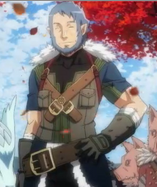