A mailman person who delivers on the 4th of every month. Always cheerful and smiling.

As a returning character from Rune Factory: Frontier, her personality likely remains the same when she was in mentioned game.

Anette still looks the same as when she was in Rune Factory: Frontier.

Anette is a character originally featured as a bachelorette in Rune Factory: Frontier.

The player can find her in Fenith Harbor by the monument on the fourth of each month. When the player speaks to her, she will usually tell him/her about Trampoli and people from there.

After her seventh visit to Fenith island, Anette will tell the protagonist that she lost her necklace. He/She will promise to look for it, but will be unable to find it until Anette's next visit. If the protagonist doesn't manage to find it by Anette's eigth visit, he/she can try again every time Anette visits.

The necklace can only be found after Anette tells the protagonist about it, and will be located in front of the habor monument, on the side nearest the ocean. To fix it, the protagonist must speak to Electra and Maerwen.

The villagers she mentions are Rosetta and Eunice.

Anette leaves the island around 6:20 PM by way of the Seaside Cave. She walks from the port to the cave entrance and then disappears, never actually appearing in the cave itself. 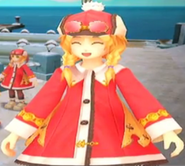