Transformed from a butterfly-shaped monster and now works at Illuminata's flower shop. Loves the warm sun and hates being cold. Her smiles seem to be contagious. Clorica's sleeping buddy.

Amber is known for being cute with a cheerful personality. However, she is also spontaneous and has little sense of responsibility. She enjoys the sun, just like a plant, and is quite naive. She is the youngest looking bachelorette, and can be mature if need be.

Amber shares traits with her monster form, Ambrosia. Specifically, she has butterfly wings that allow her to fly, and has antennae that allows her to look for ideal places for sun-bathing easier.

She and Xiao Pai have similar swimsuits.

She has a monster form, Ambrosia, and the player cannot date her until they have defeated Ambrosia in battle. Ambrosia is the first boss and she resides within Yokmir Forest, east of Selphia.

Clorica, Amber and Doug had created a group called "The Together Trio". They started a course called "Get it Together Course." Amber joined the group because "she gets to play with Clorica". They wanted to do something else as their daily routine, or become more active. On the first day, they went to meet their first expert, 'Expert Forte'. She joins them for exercise, as "a disciplined mind, means a disciplined body". She later led them on a "light jogging", they meet at the plaza, then had some "sparring practice".

The next day, the three of them went to meet 'Expert Arthur'. Upon hearing their 'course', Arthur offered them to help with his work. Amber was happy to be able to play 'office worker', she agreed happily. Arthur then gave them the paperwork, he asked them to stamp the forms and told them that the paperwork was not the most difficult job, but it was nonetheless important. After a few minutes, Amber was running around the place while singing, bringing much to Lest/Frey's doubt of their 'help' to Arthur. Arthur, being an optimist, believed that they were doing their best in their own way. After done 'helping', Clorica thanked Arthur for teaching them, Arthur thanked them back for helping with his work instead. They went out not a moment after. They promised to meet again tomorrow, Clorica was having fun working, even though Doug think they should really do something other than 'work', Amber was just happy to be a part of the group.

The next, the trio went to see Margaret, calling her 'Expert Meg'. Margaret had heard about them studying on how to 'get it together', she decided to teach them something that will help them foster their sense of rhythm. At first, they didn't understand it, Margaret then explain that rhythm isn't just important in music, but in everyday life. She tells them that keeping a rhythm in performing their daily activities regularly such as "sleeping regularly" and "eating three square meals a day". She believed that by setting and keeping up a proper daily rhythm will help them keep it together. Amber didn't really get it, but she said that it sounded very smart as said by Margaret. She began the lesson by starting the music, she then starts teaching them how to keep in rhythm by having them keep up with her dance moves. Amber was really happy and enjoyed the lesson. The three of them had a small meeting afterwards. Clorica said that the next lesson will be the last, Doug didn't really understand the lesson, but was a bit sad that the lessons are almost over.

On the following day, they went to see 'Expert Dolce'. Dolce said that she doesn't have anything to teach them. But after Clorica, Amber and Doug persuade her, Dolce agreed after being called a 'Teacher'. She began teaching them to keep it together by always keeping calm under any cicumstances. Suddenly, Pico came rushing to hug Dolce, but Dolce dodged and Pico accidentally fell into the river. Then, Dolce wanted them to try keeping calm, but Doug was not sure how to. Clorica sees Vishnal just walking by the street, she called him to join them. Dolce wanted Vishnal to be their 'practice opponent', Vishnal asked what kind of practice opponent it was, Dolce replied by saying to let the three of them just beat him up. The three of them had beaten him up, leaving Vishnal all bruised up. Dolce said that the lesson is over, then she brings Vishnal over to the clinic. Clorica announced that their "Get It Together Course" has already finished. Doug was happy that the course is finished, Amber was also happy that they all worked hard. Doug asked Clorica why she just give away a 'lukewarm' reaction. Clorica still wasn't sure if she really can keep it together. Doug and Amber tells her that she had more of it together than both of them. Clorica is grateful that she improved. She said that "The Together Trio" finally had to break-up, but she is sure that their experience together will last forever.

The event first starts out with Kiel talking with Amber regarding another one of Bado's products. Amber, as usual, falls for the description regarding the product cheerfully. The next day, Amber is talking with Kiel again regarding another one of Bado's products, surprisingly, Amber breaks out off her cheerful personality, and openly voices how stupid the product may be. The day after, Amber then begins voicing out her strong dislike, much to Forte, Kiel and Lest's surprise. Shortly after, Amber immediately collapses, having no memories of the previous conversation.

The three begin contemplating that Amber may be possessed by a ghost, and Kiel begins researching more on the incident, while Amber tells Lest that she's also been suffering the same phenomena at night. Later Amber arrives, but, this time, states that she's actually Ambrosia, the monster Lest defeated. She states that she was supposed to return to the Forest of Beginnings, but due to Amber's requests, she shares Amber's body with Amber. She tells Lest that Amber should get rid of Ambrosia, because Amber's soul will disappear from her body.

The next day, Amber invites Lest to the observatory, where Lest tells her that she needs to get rid of Ambrosia, before she fully takes over, causing Amber to leave immediately. Later, Ambrosia talks with Lest again, becoming increasingly concerned, as she is now present in the morning, and can no longer hear or sense from Amber anymore. When Lest tells Amber, she states that she would like Lest to give Ambrosia one final day with Lest.

The two soon go to Yokmir Forest, and later, Amber fades away, leaving both Ambrosia and Lest speechless. Kiel, however, reports that Ambrosia is a manifestation of Amber's strong feelings, meaning it is possible to reawaken Amber with strong emotions.

Because of this, Lest talks with Ambrosia once again, and states that there may still be a way to get Amber back. This eventually leads to a fight between Ambrosia and Lest, where Ambrosia gives her wishes a physical form to fight against Lest's, to give Amber a chance to reawaken by vanquishing Ambrosia's conflicting desires. With this personality gone, Amber and Lest immediately return back to town, though Amber runs into a mysterious being that Lest doesn't see, implied to be Ambrosia. Ambrosia states that her wish was, in reality, for both her and Amber to coexist.

Amber looks up to Illuminata, as she is often influenced by Illuminata's detective-style antics. She is also very fond of Forte. However, in the Sincerity General Store, and everywhere else in Selphia, she has a very platonic relationship with most of the townsfolk. In some instances, she would tackle either Lest or Frey out of nowhere, and in another instance, she has kissed either main character on the cheek out of feeling merely playful; this shows a somewhat mischievous side to her as well.

Amber is well liked by just about everyone in the town.

Amber's favorite foods reflect the preferred foods of most insects as well, as she is fond of fruit, honey and flowers, all for consumption. Her fear of fish can be attributed to how many fish eat insects.

Amber works part-time at the flower shop and is taken in by Illuminata after she moves into town.

Chibi Amber on inside of case 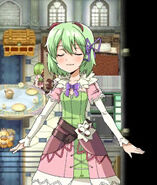 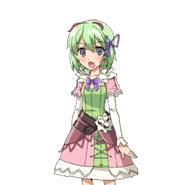 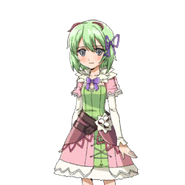 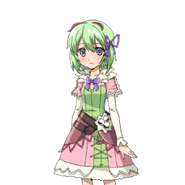 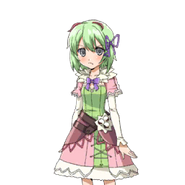 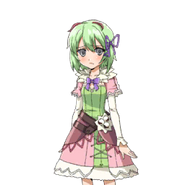 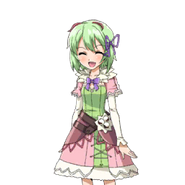 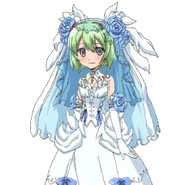 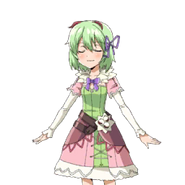