Sonja's childhood friend. He looks rough-around-the-edges, but is a very considerate and gentle guy.

Ted Sroka
Aden (アゼル, Azel) is a bachelor in Rune Factory: Tides of Destiny as well as one of the protagonists. He is an Earthmate and childhood friends with Sonja.

A fairly easy-going and happy-go-lucky guy, he is sometimes incredibly dense, and often quite blunt. Despite this, he is fairly caring, and will do anything to help someone out.

Aden is known as a bit of a busybody, constantly moving around.

He is a tad oblivious to the affections of others, particularly among girls with affection toward him. This is most evident during his friend/love cutscenes with Violet and Odette, both of whom attempt to take him on a date. Both dates end with limited success due almost exclusively to Aden's inability to comprehend, something which Sonja points out as to help the girls realize it his fault it failed, not theirs.

Aden has pale skin white hair with a blue-grey gradient and blue eyes. His clothing is similar to that of Sonja's, but appears more old-fashioned in comparison to the other inhabitants of the island.

Aden is the main character at the beginning of game. Like several main characters from previous games, Aden has the ability of an Earthmate through the use of a spirit wand. For an unknown reason, his best friend, Sonja, is forced to share his body, having two consciousness inside. After completing the main storyline, player has the option to continue playing as Aden or to play as Sonja.

He is later revealed to be from 200 years from the past; a displacement caused when time magic was used by Pandora to summon the 4th Dragon princess, Sonja, but whose body was stolen by the Masked Man. Since she was summoned but did not have a body, Aden was chosen as a host. He opts to stay in the "present", believing that he fights for the island and people he loves, regardless of time. He also learns he is the Dragon Knight, protector of the Dragon Priestess'.

Aden's 9 heart event isn't triggered by talking to him, but rather occurs upon entering the church garden at ANY point after restoring Sonja and playing as her. So if playing as Sonja, no matter how the player cuts it, it will always be canon that Aden harbored feelings for her.

When playing as Sonja, Aden can be found training outside the Inn with Mikoto and helping with patrol. During Holiday events he can be found just outside Sonja's home.

Aden in his swimsuit

Aden in the opening of Tides of Destiny 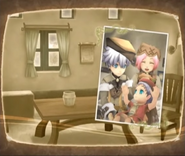